Israel. The Left used to understand. Maybe, someday, it will again.

Many of us born into the Left grew up with folk music ringing in our ears. Words like ‘justice’ and ‘freedom and ‘humanity’ were all around us and they meant something, actually they meant a lot. Joan Baez, Ewan McColl, Paul Robeson, Luke Kelly, Christy Moore, they all articulated struggles with such beautiful clarity, I believe their music made people more humane. I think about this song, Pete Bog Soldiers sung by Luke Kelly. I think about it a lot, actually. It was written in 1933 by two left-wing, political prisoners in a Nazi concentration camp, Boergermoor, and it was sung by folk singers the world over. I listen to it and my heart breaks at how far the Left has fallen.

Far and wide as the eye can wander, Heath and bog are everywhere,
Not a bird sings out to cheer us, Oaks are standing, gaunt and bare.

[Chorus:]
We are the peat bog soldiers.
We’re marching with our spades, To the bog.

Up and down the guards are pacing, No one, no one can go through.
Flight would mean a sure death facing, Guns and barbed wire greet our view.

We are the peat bog soldiers.
We’re marching with our spades, To the bog.

But for us there is no complaining, Winter will in time be past.
One day we shall cry rejoicing, “Homeland dear, you’re mine at last!”

Then will the peat bog soldiers,
March no more with spades,
To the bog.

What started in Boergermoor did not end there, of course, and the terrors of those early concentration camps only grew, supplemented by the unfathomable evil of the death camps and the Holocaust. Gay people, communists, and gypsies were victims of these camps, but the most bitter hatred of the Nazi regime was reserved, as we all know, for the Jews.

On the anti Israel Left, the question is  asked, “did they (pro Israel Jews) not learn the lesson of the Holocaust?” I presume that they’re trying to make a point about the intrinsic evil of violence. But perhaps they could reflect on the other, more specific lesson learnt by Jewish people in the 20th century: 6 millions Jews were slaughtered, and no one came to help them. Yes, the world  joined the fight eventually but not until it was far, far too late. Without a Jewish homeland, dedicated to the safety and protection of the Jewish people, there was no nation, no government, no army, for whom the protection of Jewish people was their overriding moral duty. They were citizens of nowhere, so no-one came to help. It is a fate being experienced today by the Kurds, another stateless people who, no matter what they face, they are the priority of no government, and they are always, ultimately, abandoned. With no state, no homeland, they have ‘no friends but the Mountains’, as the Kurdish saying goes.

“Early killings [of Jewish children] were encouraged by the Nazis in action T4, where children with disabilities were gassed using carbon monoxide, starved to death, phenol injections to the heart, or by hanging.” 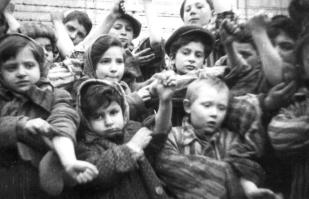 This is one of thousands of pictures from the Holocaust. This one sees Jewish children in an extermination camp, thankfully saved before they got to the gas chambers. Here they are showing their identification numbers, their branding as part of the process of the systematic eradication of their race: men, women, children, burnt to ashes, hanged, murdered, 6 million human lives, gone. For most people, it is thankfully impossible to imagine such a feeling, but can you for a moment just try to imagine if they had done this to your children? To your mother? Your father? Your grandfather? Your grandmother? How determined would you be to make sure this could never, ever happen again. That is how the Left used to feel, the Left I grew up with. These were Jewish children, and they were humanity’s children. These were crimes against the Jewish people, and they were crimes against humanity. The Left used to feel this evil with everything we had.

If you think there is a hardness to Israel’s policing of the safety of its citizens, you’re probably right. But if you can’t see why the state of Israel will fight tooth and nail to preserve its existence and protect its people, you can’t possibly understand the history of the 20th century, not really. Those who do will always support the existence of the Jewish homeland, and will always defend its right to protect itself and its people. The Left used to understand, maybe it can again.  For me, well I still feel it, and it is why I will support the existence of Israel, and the idea of Israel, always.

Pete Bog Soldiers was written in a Nazi concentration camp by Wolfgang Langhoff, (a member of the German Communist Party) and Johann Esser. The melody was composed by Rudi Goguel. It is one of the greatest folk songs of all time.  More information here.